All the way back in October 2015 (also known as just over two months ago), I wondered aloud whether the recent spate of funds being plunged into new media ventures would pan out:

In other words, the demand for ad space is relatively constant: it’s the supply that’s gone haywire. But instead of recognizing the long-term infeasibility of supporting hundreds of content producers with the same share of national spending that used to support a tiny fraction of that number, news sites have exerted an enormous amount of energy attempting to bite into each other’s rapidly diminishing shares of page views…

Strangely enough, none of these developments has stopped huge media conglomerates and venture capitalists from investing heavily in these very aggregation-centric properties, from Axel Springer’s purchase of Business Insider to NBC Universal’s investment in both Vox Media and BuzzFeed, and many other examples besides. One way of reading this is that legacy media companies are making smart plays for the upwardly mobile millennial set and gaining innovative ad tech in the process.

But another possibility is that, in the mad dash to capture The Next Big Thing in media, buyers are wildly overpaying…Both ad-blocking and the possibility of an eventual contraction of available VC money threaten to severely damage the [online ad-supported] business model.

It’s too early to know for certain, but the slowdown in new media may already be starting. Exhibit A is a Digiday piece published today titled “Digital publishers face a winter of discontent.” Its URL slug is even more to the point:

But it’s the chart in the article that most vividly portrays the predicament of several new media companies: 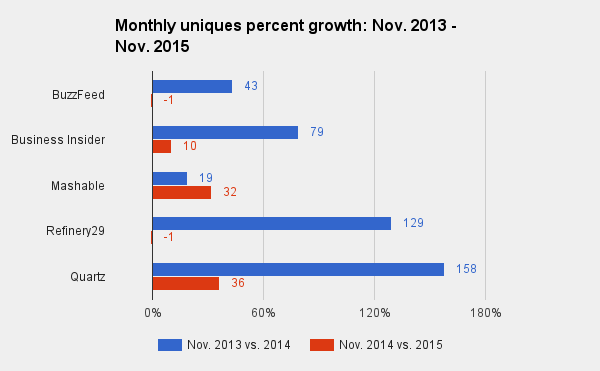 “If you’re one of these companies and you can get out now at a valuation that is acceptable, now would be a very smart time to do so,” said Seth Alpert, managing director at advisory firm AdMedia Partners. “If I was invested in one of these businesses, I would want to exit in 2016.”

The challenges on the business side are fueled by the overabundance of publishers on the Web. Ad buyers are looking for deeper deals with a handful of partnerships, which is bad news for the sites that don’t make the cut. Digitas LBI chief content officer Scott Donaton said that while RFPS used to go out to 10-20 partners, today that number is closer to two or three. In some cases, agencies start out with only one partner in mind.