On Wednesday, Jared Friedman at Y Combinator – the storied Bay Area tech incubator – published a piece on the YC blog, The Macro, called “The Startup Zeitgeist.”

The post analyzed tens of thousands of applications to the Y Combinator startup accelerator program over the past eight years. If you have the time, it’s certainly worth reading through the entire piece, which contains a lot of cool graphs and accompanying commentary.

What especially caught my eye, though, was this particular chart: 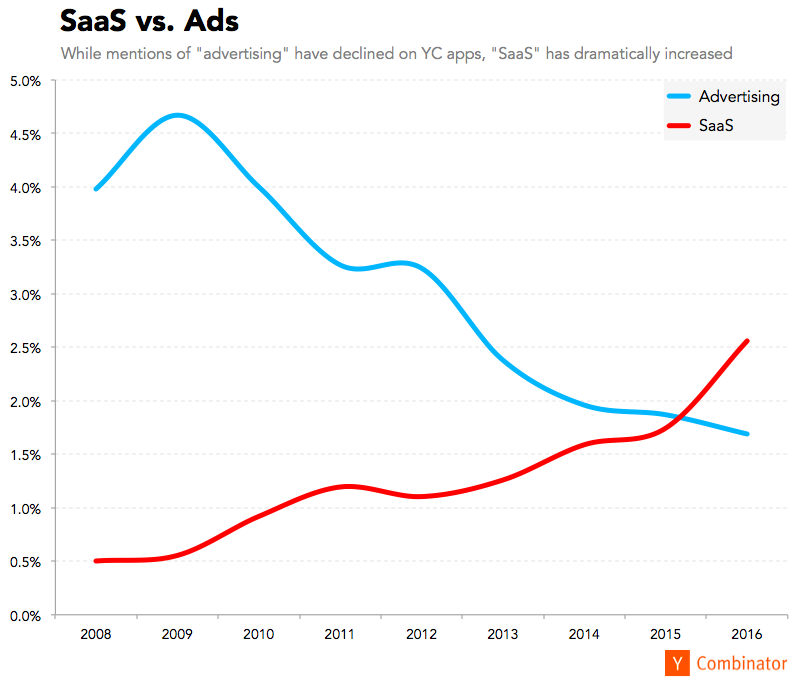 Granted, Y Combinator is just one accelerator (albeit the most influential one), and applications may or may not paint an accurate portrait of tomorrow’s business models. But what this graph clearly shows is a mass migration away from the world of “ad-supported business models” and towards one where end users pay up:

This is a big deal. It suggests that, at least insofar as the next generation of tech innovators is concerned, advertising as a bankable revenue stream is falling out of favor, and fast. What will be interesting to observe in the coming months and years is whether the news industry will be able to reinvent its business model quickly enough to avoid succumbing to this broader trend away from ad-supported products.

Two different, but not mutually exclusive, models may show the way. One is what’s shown in the chart above: getting users to pay for the content they read, rather than relying on the vanishing revenue from a nearly infinite supply of digital ad impressions. This model can exist in multiple forms: for example, via a paywalled subscription model à la The New York Times, or via a micropayment one-stop shop like Blendle.

The other model is to blow up the CPM model and start all over with a unit whose supply is substantially scarcer. Premium publishers like FT and The Economist are already beginning to transact based on time: cost per hour (CPH) and its variants are gradually gaining steam in the industry.

This new CPH metric, which measures the aggregate amount of time a given ad creative is actually visible on users’ screens, holds the promise of punishing clickbait and rewarding in-depth articles and engaged readerships – exactly the combination that favors high-end news organizations. (Disclaimer: I work at a company that measures attention online and is involved in these efforts.) By focusing on time spent rather than simply the number of times the ad rendered (or appeared at least 50% on-screen for at least one second, which is the MRC viewability threshold for display ads), high-quality publishers will be rewarded for producing content that engages their users and grabs their attention.

In the near term, premium news organizations will likely end up pursuing some combination of both of these methods until they’re able to determine which one, or which balance between the two, serves them best. But it appears that the old CPM model, in which scale is king and clickbait is often the path of least resistance to get there, is gradually fading from the scene, at least for those who can afford to do better.